THE HANDOFF:YOUR ROADMAP TO A NEW DOCTOR’S CARE 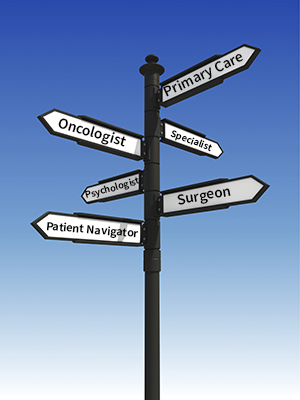 It could be a broken wrist, or a life-altering battle with cancer, but sooner or later most patients run up against the diagnosis that sends them from their primary care doctor’s care into the hands of a new physician. In medical circles, this transition is called the “handoff” — a casual name that conceals the complications and risks of this journey.

If you’re a hospital patient, you’re likely to be seen by multiple doctors and nurses who need to know your exact diagnosis, your litany of medications, and instructions for further care. Many hospitals are now adopting strict, standardized procedures for sharing this critical information among your caregivers. But so far, few such standards exist outside the hospital setting.

Sometimes, the handoff journey is a smooth one. Seventh-grade teacher Pati Hawker found out she had breast cancer from her OB/GYN, who recommended a handful of surgeons, oncologists and plastic surgery specialists and promptly transferred all her medical records to the doctors she chose. “Nothing got lost; it was very smooth, a very painless transition,” she remembers.

Other times, however, the handoff is a traveler’s nightmare. When Sue Sword found out she had chronic kidney failure, her primary care physician referred her to a specialist at an expensive clinic that did not accept her health insurance. After she asked her regular doctor to recommend someone else, she recalls, “He said, ‘Well, if you don’t want one of the best in the state, you can find your own doctor!'”

Patients tend to be more satisfied with their care and likely to trust all of their doctors after a successful handoff. But the benefits can be even more tangible. A good handoff can prevent medication errors, misdiagnoses and unnecessary testing, according to researchers.

“One of the most dangerous times for a patient is when there’s a transition between doctors, and not all of the patient’s information follows,” said Carolyn Clancy, director of the Agency for Healthcare Research and Quality, in a recent podcast on the agency’s Web site.

Where I Am Going?

Leahanne Sarlo, a 36-year-old editor, knew her internist had referred her to a specialist to examine her enlarged ovaries, but she got a rude awakening when she called to make an appointment with the new doctor. “I didn’t realize they were sending me to an oncologist until they answered the phone, ‘Hello, Cancer Center!’ I kind of freaked out at that point. I had known I was being referred to a gynecological specialist of some kind, but not that kind!”

The start of the handoff is like the start of a road trip; it’s important not to leave home until you have a clear idea of your destination. Your referring doctor should be able to tell you exactly why she is referring you to a new doctor and what to expect from the referral, including the possibility of new tests or treatments that will start immediately.

Richard Frankel, a professor at Indiana University School of Medicine, says he would also ask his regular doctor about the new doctor’s personality. For instance: “Are they open to my asking questions?” and “Are they good at giving explanations?”

If the feedback on personality is negative, but the recommended doctor “is technically proficient, I would want to know that my primary care doctor will answer these questions [instead],” Frankel says.

It’s also important to realize that you have a choice in your destination. Sword did go to the specialist recommended by her regular doctor, spurred by his insistence that she was facing a medical emergency. Much later, she discovered another well-respected kidney specialist who took her insurance and was closer to her home. Her regular doctor did not want to refer her to the nearby physician because “he said I wouldn’t have gotten in for a couple of months.”

“So I came home and called that specialist’s office and they said, oh no, if it’s an emergency, we get you in right away,” Sword said.

What Should I Bring?

Traveling to a new doctor always involves the baggage of your medical record, whether you decide to carry it yourself or send it on ahead. To ensure that relevant test results get there in time for the appointment, it’s probably wisest to arrange to hand-carry those yourself.

At the very least, your regular doctor should communicate with the new doctor to explain why you are seeking his or her additional care.

The referral could happen by letter, e-mail or over the phone, depending on your primary care physician’s office procedures and her personal relationship with the new doctors, according to Frankel. “I think a combination of multiple methods probably works best, but there’s nothing like picking up the telephone,” he says.

However, some doctors are unwilling to call other doctors to refer patients — and it is perfectly legitimate to take the initiative and make the call yourself.

Choosing a communication channel could be the easy part. Several studies of referral letters suggest specialists are often frustrated by the lack of details about the condition and reasons for referral in these letters. Inside and outside hospitals, “there are lots of occasions when a patient’s care is handed off and there really isn’t any check or balance on whether an incoming physician actually comprehends what needs to be done,” Frankel says.

If you’re seeing a specialist for the first time, it may not be necessary to hand over your entire medical history. James Lubowitz, an orthopedic surgeon at the Taos Orthopedic Institute in New Mexico, prefers to take his own medical histories with new patients. “If it’s a 70-year old person who’s been going to a family doctor for years and they send over a 100-page chart, that’s not helpful, that’s a burden,” he says.

But Lubowitz does ask his new patients to bring any X-ray and MRI films so that he can examine them directly, rather than rely on a written report. He suggests that patients copy or borrow these films from their radiologists and hand-carry them to their appointments.

Back to Square One

If you’re seeing a specialist for something like that broken wrist, the odds are good that your journey to a new doctor is a temporary, one-way trip.

But when a patient’s condition is complicated or chronic, “I do believe that communication with the primary care physician is important to manage a patient over the long term,” he adds. Good communication between doctors is vital when those complications arise, Hawker discovered. As she prepared for a double mastectomy and reconstructive breast surgery, her oncologist consulted with her surgeons to make sure her pain medications wouldn’t interfere with chemotherapy or anti-nausea drugs.

“I was looking at all of them as help … I was very grateful to be going to all these people,” Hawker said.

What You Do to Help Your Handoff