GIVING YOUR DOCTOR THE PINK SLIP 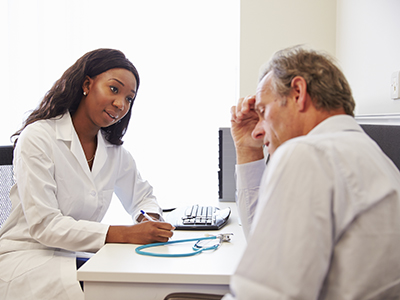 After Lois Anderson had breast cancer, her cancer doctor told her to see another specialist when she kept feeling like she had the flu.

Afraid the cancer had returned, Anderson was looking for quick action and a doctor who would listen. She wanted the best. It turns out “the best” in her York, Pa., hometown was a chest surgeon who was known for his skills as a surgeon and for thinking a lot of himself. But Anderson was determined to keep an open mind.

She took some test results along when she went to consult with the surgeon. Her follow-up breast cancer care included regular blood tests to check if her cancer had returned.

Anderson’s most recent test for tumors showed she might have a problem, so she passed that information on to her new specialist.

But Anderson, who is a medical technologist, says she got the sense that the surgeon didn’t want to be bothered with medical evidence outside his expertise. “He said, ‘I’m the mechanic, I fix things,’” And, he didn’t seem to value her opinions, Anderson recalls.

She says he told her it was probably a chest cold and “we should wait three months and see.”

Anderson left her consultation feeling uneasy, yet she didn’t want to alienate the surgeon by speaking up. But when another two and a half months went by, Anderson insisted on some action.

“My [blood test for tumors] kept rising; each one was more elevated than the next. Something was going on. I was putting everything together; he wasn’t,” she says. “Finally, I said, ‘I want something done.’”

At that point, her specialist performed a thoracotomy. During the operation, the surgeon cuts into the chest wall to reach the area near the lungs.

“He found a very thin layer of cancer on the pleural sac, where the lungs sit in. It hadn’t shown up on any CT scans,” Anderson says.

Anderson’s husband told her the surgeon came to talk to him when the operation was over: “He said to him, ‘Guess who was right?’ My husband said, ‘You were?’ He said, ‘No, she was.’”

That admission was little comfort for Anderson, who suspects that she lost valuable time before she gathered her nerve and enough information to convince the surgeon to operate.

The new cancer was removed and Anderson received chemotherapy. As her care continues, Anderson knows that she needs doctors who will help her understand the results of her medical tests and treatments. She also wants them to listen to her and respect her own experiences and concerns.

“Now, I would go to another surgeon, stand up to him, something, be more insistent,” she says.

Giving Your Doctor the Pink Slip

Our experts — both physicians — talk frankly about rocky spots in doctor-patient relationships.

When you start seeing a specialist…
Experts say that when patients go to specialty-care doctors, it can be even harder for patients to feel comfortable. Communication styles may not always mesh.

Dr. Thomas Weida: “With a specialist, patients can be more limited with their choices. I tell them, “Get the name of what he’s calling it, write it down, come back to me and let’s talk about it.’”

When your doctor doesn’t seem to respect your opinions or welcome your questions …
The experts say you should speak up when you feel uncomfortable or it seems like your doctor is not listening to you.

Dr. Barbara M. Korsch: “There’s a pathetic eagerness to please the doctor. People think they’ll get better treatment if he likes you. The question is, how courageous or cowardly are you? Sometimes you have to face the music and see what happens. The result might be that you get what you want because he’s so surprised that you said something.”

When the doctor says No …
Try to learn the cause of the problem. Is it that you can’t talk to your doctor or that you are having different ideas about what to do? Trouble with your health insurance may also be part of the picture.

Dr. Korsch: “What we can do is deal with how the visit actually goes. It’s important to figure out if it is a system problem. In those cases the patients can’t fix it, the doctor can’t fix it.”

Dr. Weida: “This can happen when I disagree with a patient about pain medication. There are just some folks you can’t make happy. Sometimes I’ve had to say: ‘We have to agree to disagree on this.’”

Dr. Korsch: “Sometimes people have unrealistic expectations. They want you to put their child in the hospital for a cold. People say ‘he never even gave me an antibiotic’ when an antibiotic wasn’t medically called for.’”

When the medical staff is rude or it takes weeks to get an appointment…
Dr. Weida: “I do prefer to know. Most of the time I’m in my little cubicle or in an exam room with a patient. If it’s happened to one person, maybe it’s happened to 20 or 30 people and I never heard about it. One of the reasons people leave a practice is the interaction with the office staff. That’s something I can fix.”

When it’s clear you need to move on …
Most experts say there’s no need for a dramatic breakup. Don’t waste valuable appointment time and money to confront a doctor whom you’ll likely never see again. Instead, you should send a letter asking for your medical records and express your concerns in a calm, businesslike way.

Dr. Korsch: “Move on if there is a breakdown in communication, but only if you’ve attempted to deal with it first. Doctors don’t like to be criticized; put it on yourself. Remember, no personal attacks. The emphasis should be on ‘We are having trouble.’

Dr. Weida: “You might not click or connect; sometimes, it just doesn’t work out. Then it’s reasonable to look for another doctor. If you’re not getting answers to your questions, if you don’t know what’s going on, then it’s time to go.”

Our Experts
Barbara M. Korsch, M.D., is a retired professor at the University of Southern California School of Medicine and co-author of “The Intelligent Patient’s Guide to the Doctor-Patient Relationship: Learning How to Talk So Your Doctor Will Listen.”

Thomas Weida, M.D., is a physician in Hershey, Pa., and board member of the American Academy of Family Physicians.

Ten Reasons to Fire Your Doctor