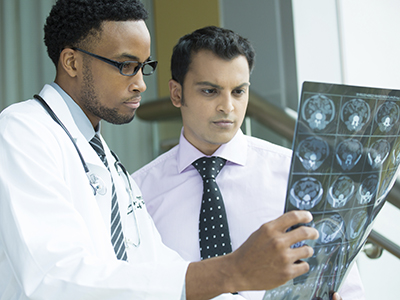 Is it OK to seek a second (or a third, or a fourth) opinion on your diagnosis? Many people feel uncomfortable with the idea that they are questioning the authority or expertise of their physician. Some fear that they will receive worse care if they appear to be pushy or difficult patients. Others worry that their actions will be seen as a “betrayal” and could sever any social ties they have with their doctor. Gathering multiple opinions on your medical condition can be one of the most emotionally fraught decisions that a patient has to make.

When Chip Wells visited a hematologist after learning he had leukemia, the doctor’s attitude struck him more cavalier than low-key. Wells asked him to recommend another specialist although it wasn’t an easy request to make.

But patients do have to make this decision. Research confirms what most people already feel in their gut: not all doctors are alike. Physicians vary in how they were trained, what they specialize in, and whether they practice in a rural clinic or an urban university hospital. A decade-long Dartmouth project has documented significant differences in treatment between regions of the country. Major studies suggest that doctors deliver the best, evidence-backed care only half of the time. And it’s a rare medical condition that responds to only one treatment or therapy.

As patients are expected to make more decisions about their care, they must have access to the best information about those decisions. Seeking out multiple sources of expert advice is one of the best ways to gather this information before proceeding with a treatment plan. Don’t think of it as an end-run around your doctor: think of it as assembling the best team possible to guide you through some critical, potentially life-altering choices.

Two recent studies clarify what’s at stake in getting multiple opinions. In a University of Michigan study of breast cancer patients, more than half of them changed their treatment after getting a second opinion on their diagnosis from a “tumor board” of oncologists, surgeons and radiation experts. In a Johns Hopkins study of 6,000 cancer patients, researchers found that one to two of every 100 patients who sought a second opinion after a tumor biopsy had received a wrong diagnosis.

“Patients should recognize that a pathologist is a human capable of mistakes,” said Hopkins pathologist Jonathan Epstein, M.D., who led the study. “Evaluating tissue isn’t a machine-like process where everything comes out 100 percent correct. So it’s worth a patient’s while to get a second review of the pathology, just as they’d get a second surgeon’s opinion.”

It doesn’t have to be something as serious as cancer, either. When Seattle resident Kahti Bowser went to her doctor for a dark spot under one toenail, “my physician took one look at it and said, ‘fungus,'” she says. “He prescribed Lamisil pills without any tests to confirm his assumption.”

It was Bowser’s pedicurist who realized that the spot was blood from a broken toenail. “Something so simple was overlooked by a physician who prescribed a drug with very serious side effects,” Bowser recalls.

You might seek a second opinion to avoid a mistaken diagnosis, but the more likely scenario is that you seek multiple opinions to help you decide on a course of treatment with the best possible outcome and the best fit for your lifestyle and preferences.

“If the patient and I disagree on what is the best plan of care, I strongly encourage them to seek a second opinion, because I want them to have the option of finding a doctor who may agree with what they want to do,” said Jennifer Frank, M.D., the medical director at the University of Wisconsin Health Fox Valley Family Medicine Clinic.

Frank said she tries to “distinguish between treatment plans that are my preference or way of doing things and plans that really represent what I think almost all physicians would do.” For instance, Frank might try to “steer a patient away” from seeking a second opinion that falls far outside the mainstream of proven therapy-treating a metastatic cancer with vitamins, for instance.

Soon after Magdalena Muchlinski went to her doctor for gastrointestinal upset, she was looking for a second opinion. “The first doctor just said I had IBS [irritable bowel syndrome]. Pumped me full of meds and called it a day,” said the West Virginia professor. “I really felt like the diagnosis the first doctor gave was uninformed and a cop-out.” That diagnosis turned out to be incorrect.

She thinks many patients fear questioning the authority of their physicians. “But our health care system doesn’t always allow doctors to be true detectives and solve medical mysteries. So I always get second and third opinions when I have a serious medical issue.”

“It’s always in the back of my mind, if I speak up or countermand the doctors, that I’ll get less service or not the service I want,” said Wells, who has switched hematologists twice.

In fact, patients should know second opinions “are a way of life,” to most physicians, said Daniel Weisdorf, M.D., a University of Minnesota oncologist. “We question our own opinions constantly by talking to each other.”

So how should patients bring up the idea? Frank recommends talking about it in person and using “I” language to make it clear that it’s a concern about the diagnosis, not the doctor.

If your doctor seems reluctant to help, that should be “a huge red flag for a patient,” she added.

Bowser, Muchlinski and Wells agree that if at all possible, patients should do a little research on their own before seeking another opinion. Research can help you decide which options might be best for you, they said, but it can also make you feel more confident and less intimidated when you talk to your doctor about gathering other opinions.

Speaking Up for Your Health

The bottom line, according to Frank, is that patients must advocate for themselves. “Particularly with treatments that are expensive, potentially harmful, or with diagnoses that are life-threatening, they must make their health the first priority,” she noted. “It’s not their job to try to please the doctor or to avoid offending the doctor.”

Over the years, Bowser has found that she feels best when she consults both doctors who prescribe mainstream medications and those who offer alternative treatments. “I can’t stress enough how important it is to listen to your body, go with your gut and seek second opinions.”

Overcoming the fear and embarrassment and reluctance to ask for another opinion is a huge barrier, Wells learned. “But once you ask one question, you can ask another, and another.”

Original post by Becky Ham, Science Writer for the Center for Advancing Health. Updated by the GW Cancer Institute January 2016.